In a previous post, I used water consumption data from Utah’s Open Data Catalog to explore what kind of users consume the most water in my home here in Salt Lake City, what the annual pattern of water use is, and how the drought of the past few years has affected water use. I made a predictive model for the total aggregate water use of the city and tested how drought affected the accuracy of such a model. The data set I used for all of this also contains spatial information that I basically ignored in that first post; today let’s dig in to the spatial information and map water use in my fair city!

After loading the data, we need to do the same cleaning up as last time. There is one nonsensical row that needs removing with a non-year value in the year column. Then, let’s adjust the data types.

Now let’s use dplyr to group these observations of water use by each tract and month. I use the median for the consumption because it is less sensitive to outliers than the mean; if you remember from the last post, there are some very high outliers in water use during the drought years and my main goal here is to see which parts of the city use more water over the years in this data set, not to be overwhelmed by the outliers from the drought years.

The data frame we just made here is in “long” format, otherwise known as “tidy” data. It looks like this.

Keeping one’s data in a tidy format has many benefits and don’t worry – I AM A BELIEVER. However, for the maps we want to make here, the data needs to be in “wide” format. To do this, we will use dcast from the reshape2 library. Let’s do that and see what this data frame looks like.

So there we go! Water use data ready for some map making! Now we… uh…

What exactly is a census tract? The U.S. Census Bureau divides up each county in the United States into these tracts; the idea is that they are supposed to be relatively small and relatively permanent. According to the Census, they provide a stable set of geographic units for the presentation of statistical data.

To map the census tracts in Utah, there are a couple of options we could go with. One option would be to combine the acs package for getting U.S. Census data with the tigris package by Kyle Walker, which already includes all the U.S. census tracts. I’ve played around with tigris a bit and it is great; you can make line maps or choropleth maps or an htmlwidget or pretty much any of the other things you might like. Another option is to combine ACS data together with the census tract shape information into an R package with the functionality of Ari Lamstein’s choroplethr packages. For a variety of reasons, I decided to go with the second option.

The issue with that choice is that it involves making a new R package! The Utah census tract maps are not automatically built in to any of the choroplethr packages. I forked Ari’s repository for his choroplethrCaCensusTract package and modified it for Utah census tracts. This involved changing the names of things, getting the right ACS data, and using the appropriate shapefile for the census tracts. Dealing with the shapefile was the most difficult part. I found several posts helpful during that process, and also I’d like to thank Ari for some debugging he helped me with. I know that Ari is working on a paid course for working with shapefiles in R and I can see why; it is, as they like to say in my academic fields, not trivial.

This was a great first experience building an R package. There wasn’t an overwhelming amount of work to be done in the actual code and I was able to get a grasp on how the documentation works, how to add data to an R package, and so forth. I found Hilary Parker’s post on the basics of making an R package all I really needed to get going. If you too are interested in census tracts in Utah,

It’s Map Time (Like Nap Time But Not As Restful)

The water use data from this data set doesn’t cover all of Salt Lake County so let’s make a vector of the census tracts for mapping purposes. For the choroplethr packages mapping regions, we need to add the Salt Lake County FIPS code (49035) to the beginning of each census tract number.

Now let’s do the actual mapping. 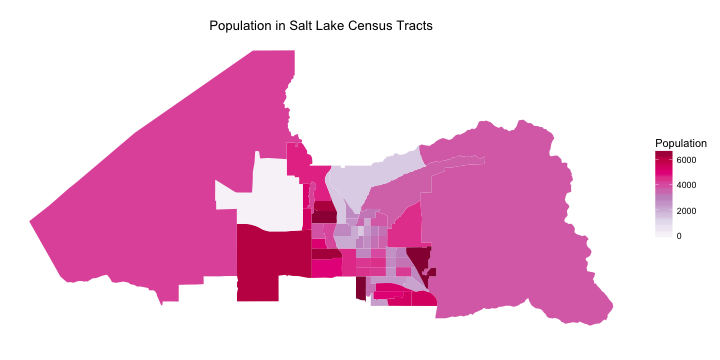 Nice! I think I have a good idea of what is what with this map, but let’s map it over a reference map for clarity. 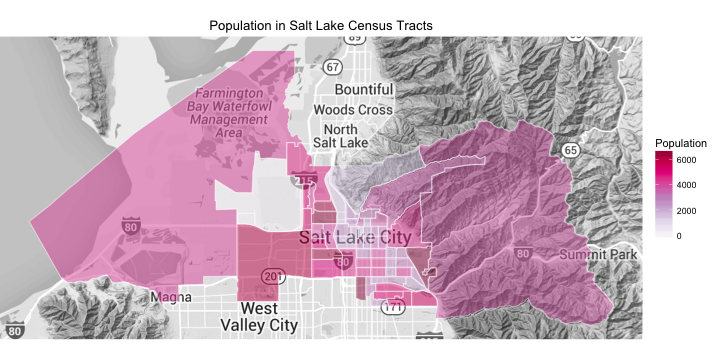 See that large census tract on the west side of town with no one living in it? That is the airport.

The relative sizes of the census tracts make less difference when we look at a quantity that is measured in a percentage, rather than in counts. Salt Lake City has a significant Hispanic population. Where do they live here? 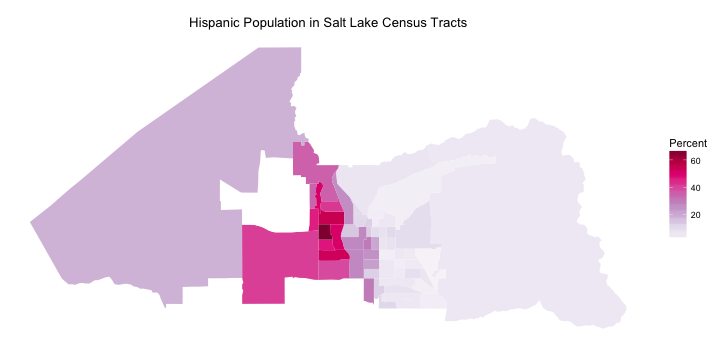 Salt Lake’s Hispanic population is concentrated on the west side of the city.

Water Use Across the City

Now that our ability to map census tracts in Salt Lake City is all set up and we have an idea of where people live, let’s look at water use. Which census tracts use the most water at which times of year? As a reminder, in my first post on water use in Salt Lake City, we saw that business and single residence users consumed the most water in Salt Lake City, and that water consumption in the city is highest in August and lowest in March. Let’s first look at water consumption across the city in August. 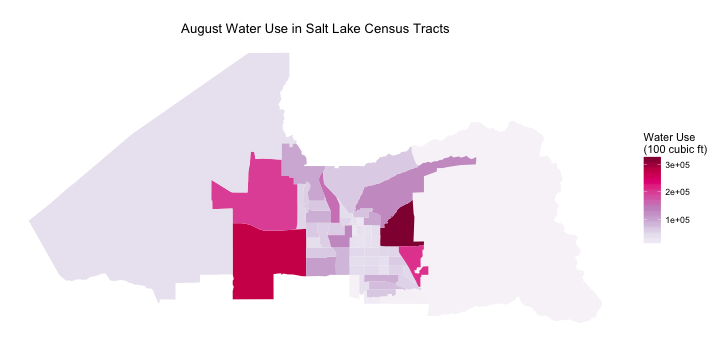 If you really want to look in detail at the areas of the city that these census tracts represent (i.e. even more than the choroplethr reference map shows), go over here to the Census Bureau and see their big, detailed map of Salt Lake City census tracts.

Let’s look at March, the lowest water use month for Salt Lake City. 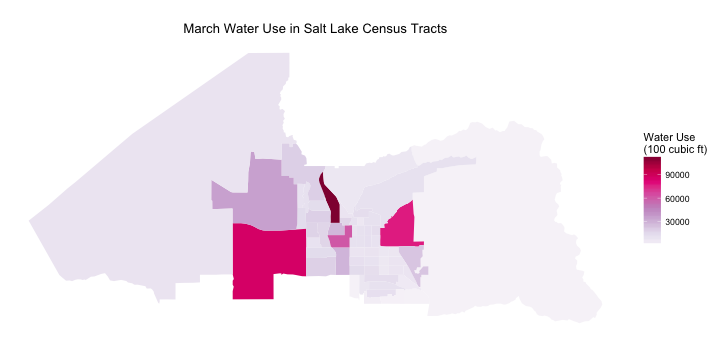 First of all, notice that the overall levels are much lower by looking at the legend. The relative level of water use is down at the airport compared to August, making me question what they are doing using so much water in the summer. Are they irrigating a lot of landscaping? Washing a lot of rental cars that don’t get washed in the winter? I did a bit of research on water use at airports but I must admit I don’t have a super satisfying answer for this one. It is also possible that this water use is due to the airport plus other businesses near the airport. Further exploration of this would be interesting.

Water use in and near the university is still high compared to the rest of the city, as is that sliver-shaped census tract downtown. That area near downtown is mostly business/industrial with very few people living in it. The large census tract just south of the airport also has a pretty high level of water use. That census tract does have a fairly high number of people living in it, but it is a more mixed area of town with business and industrial areas. All of the census tracts that have high levels of water use during March are ones that are host to significant industrial and business activity.

I opened this blog post with an animated GIF showing water use in Salt Lake’s census through all the months of the year. I did not use gganimate to make this GIF the way I did with the GIFs in my most recent post. The code I used to make that GIF is available on Github; I used R to make each of the files and then ImageMagick, a command line tool, to combine the files into a GIF. Here, you probably want to see the GIF again, don’t you?

I also developed a Shiny App to explore how water use changes through the year across Salt Lake City. The app user can choose which month to display and whether to plot the data over a reference map. Check out the code for the app here and explore the app itself here.

I used the built-in interactivity in Shiny to allow the user to click on the map and find the census tract. This is not screaming fast as implemented right now; the click gets the latitude and longitude and then the code finds which polygon (i.e., census tract) that point is in. If anybody has suggestions on how to implement this more efficiently, I’d be happy to hear them.

Single residence users are one of the top two consumers of the most water in Salt Lake City, but they (we? that includes me, I suppose!) are spread out throughout the city in many census tracts. Business and industrial users of water also use a large amount of water in Salt Lake City, but they are concentrated in just a few areas of the city so those census tracts have exceptionally high levels of water use. The airport, or perhaps the airport plus businesses near the airport, use a lot more water than I expected. I really enjoyed working on this whole project; learning about maps and how to make them is very rewarding. The R Markdown file used to make this blog post is available here. I am very happy to hear feedback or questions!